Pressure pipe systems made of polyethylene (PE) are being used in local gas and water supply systems worldwide with a growing market share. This trend, especially with regard to PE pressure pipes with ever larger nominal pipe sizes, is far from over. This is an impressive success story, especially in view of the fact that today’s HDPE pipe quality was only developed 65 years ago. 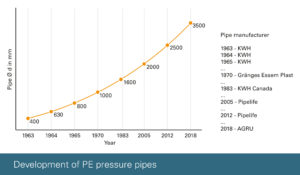 Histo­ri­cally, the develo­pment of PE pipes began as early in 1933 with the develo­pment of the low-density PE raw material: LDPE (PE-LD), which was produced using the so-called high-pressure process. From today’s perspective, not only was the process uneco­no­mical, but the properties of the PE produced in this way were by no means compa­rable with today’s PE pressure pipe quality. 20 years later, in 1953, the production of a high-density Polyethylene, HDPE (PE-HD), was successful. This technology, developed by Karl Ziegler and Giulio Natta, enabled polyme­ri­sation using the more econo­mical and versatile low-pressure process. As early in 1954, the Hoechst company in Frankfurt (today Lyondel­l­Basell) started the production of raw materials and PE pressure pipes. Hoechst worked on a broad front to market the new material. Initial appli­ca­tions were found, long-term internal pressure tests were initiated and scien­tific material studies were carried out to support market demand for applications.

In the post-war years in the Ruhr area, gas suppliers were looking for an alter­native to the grey cast iron standard of the time, as serious failures repeatedly occurred due to ground subsi­dence and brittle pipes. Initial appli­cation tests showed that the welded, elastic PE pressure pipe systems behaved as theore­ti­cally expected and did not suffer any damage even in places where soil movements caused failure with the old market standard. These safety advan­tages of PE pressure pipe systems were decisive for their rapid accep­tance by the utilities and subse­quently in the gas industry.

One of the decisive factors for the rapid spread of the material in pipeline construction was the array of economic advan­tages of the new type of pipe. The laying of PE pipes of 100 to 1.000 m in length, which were installed on-site in the pipe trench as coils or drums, was also ground­breaking. This resulted in fewer connection points and, in addition to the consi­derable cost savings, in increased system security. Unlike other materials, polyethylene is corrosion-free without restriction, which over time has led to incre­a­singly versatile appli­ca­tions, even for larger nominal pipe sizes.

A leap in develo­pment that went hand in hand with larger diameters is repre­sented by appli­ca­tions in which almost endlessly long PE pressure pipes were produced directly on the coast. The pipes extruded into the sea were towed to their desti­nation floating behind ships, for example to connect an island with the mainland. The PE-100 „Peace Water Pipeline“ project, an 80 km-long DN 1500 pressure pipeline from Turkey to Cyprus, floating freely across the Mediter­ranean, is unpar­al­leled in the world. The trend towards larger pipe diameters is favoured by the need to transport drinking water, sometimes over long distances. In addition, ever larger indus­trial plants are being built directly by the sea in order to be able to manufacture more econo­mi­cally. The production facilities are cooled with sea water. PE is the preferred pipe material for large pressure pipe systems not only because of its corrosion resis­tance. But also because of its easy and econo­mical instal­lation. The incre­asing use of PE for large cooling pipe systems leads to an incre­asing availa­bility of large, durable PE pipes and suitable fittings.

The wall thickness of the pressure pipelines results in the achievable, required operating pressures, whereby it is parti­cu­larly important that the fittings with the same connection dimen­sions do not restrict the load-bearing capacity of the piping systems, i.e. that they are fully pressure-resistant. The production of stable fittings, which includes the manufac­turing of fully functional flanges, is the unique selling point of the Reinert-Ritz company in Nordhorn in Lower Saxony. 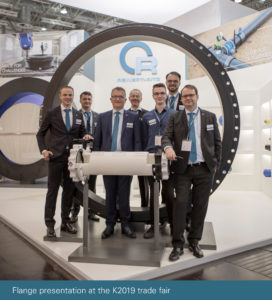 Since the 1950s, PE pressure pipes have been constantly conquering new appli­ca­tions. The high relia­bility, long lifetime and easy instal­lation have been the reason to choose PE pressure pipes since the beginning. The market has developed very positively: There are suitable pipes and many standard fittings for almost every appli­cation. For special challenges there are specia­lists like Reinert-Ritz. Many impressive projects in the past years and decades have shown how capable PE pressure pipes are. In the future, both the diameter and the pressure load will continue to increase and thus further fields of appli­cation will be realized in PE pressure pipes.

Rely on the right material and the right partners for your pipeline projects. Contact us, we will be pleased to support you in your challenges. 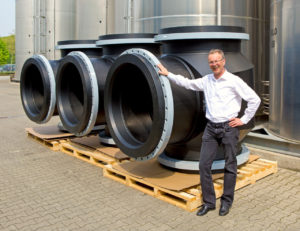 Michael Ritz was managing director of Reinert-Ritz GmbH from 1989 to 2018.
During these years he supported various challenging projects by optimising and imple­menting them. In addition, his many years of experience have been beneficial to standar­di­sation projects. For example, he has been working in the DVS working group W3.4a since the 1980s. Among other things, the worldwide recognised standard DVS 2210 is developed in this group. Privately, he is an enthu­si­astic mountaineer and babysitter for numerous grandchildren.